0.4.17 passed initial testing from our valiant testing volunteers, however it failed the testing on cabinets and for those who use dance and pump modes for skill/technical based play. As the whole point of this LTS programme is to ensure stability and remove opportunity for the game to crash or have problems in general play this was unacceptable, and we went back to deep bug fixing which is why this release is later than planned, but provides a much more stable environment for play.

As with development we cannot guarantee you’ll never crash, but we have reduced bugs and situations where that could happen while you’re playing the game.

We hope you enjoy the fruits of our work, with this proper stable build, and appreciate your continued support! 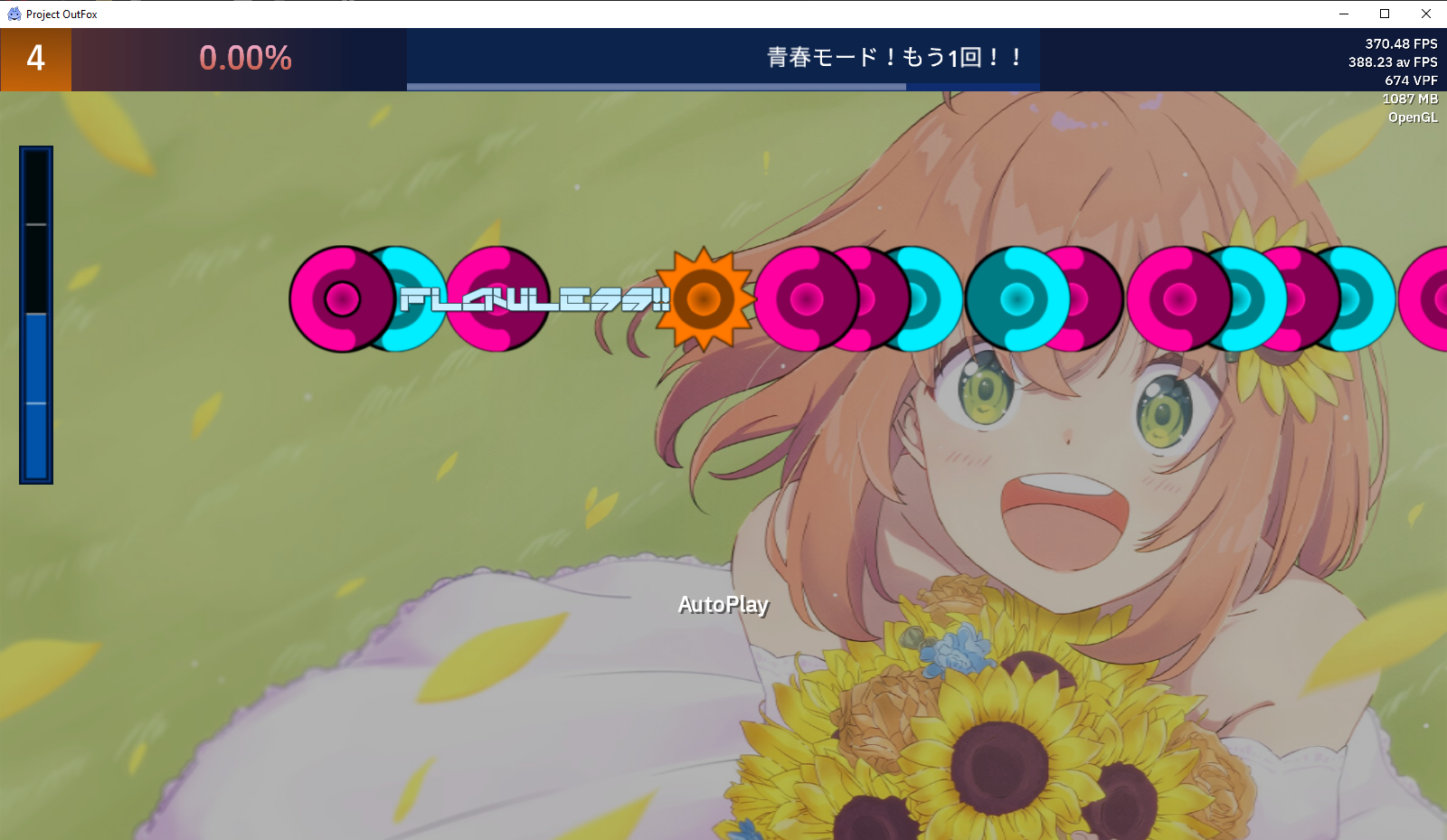 Based on a game for home consoles released in the early 2000s, this mode brings in a highly requested fan favourite to OutFox!

Played using the left drum, right drum, and clapping, this fun mode at the moment uses the games TJA and OTO loaders to support fan created TJA content, and Mode 1 from osu files, though bear in mind, many of the osu files are not designed with fun in mind, so it may become painful using your hands to play these files!

You do NOT need to enable auto-gen for this mode! It uses any TJA or OSU files in your folders already to generate tracks! Remember our taiko support is ongoing, so some holds and effects do break sync, but we will be fixing these in time. We do not have a theme yet for this mode, so game-play is with the basic ‘default’ for now, so you can have a play and feel for it!

This is our 18th Working Game Mode that this engine supports, and we are truly humbled by the awesome support you, the players, provide us to continue to improve and expand on what this museum contains within it’s wall of code!

We have designed this mode alongside the project OpenTaiko so that charts made using the new TJA letter types in the charting format will be cross-compatible between the two simulators moving forward.

As part of our commitment to getting the game out of the eventual development hell, we have had a discussion and all agreed to keep the alpha 4.xx branch active for the next year while we work on finalising the alpha V branch.

What this means to you, the end user, is that if you do not want to have to change builds all the time and deal with ’new feature’ bugs, then this branch will be maintained (for bug fixes only) in a 1 month bug fixing schedule until December 2022, then will move to a quarterly release schedule (so 4 more updates) until it is retired at the end of December 2023 with the final release being 4.24.

This branch is stable enough for the removal of the ‘alpha’ prefix, and if you get any bugs or issues do report it. Things deemed important will be back-ported to the 0.4.x branch, but the team will be focussing more on 0.5.x in 2023 and beyond.

This month we also added a new logging system which will greatly help with any debugging needs that you have. We have changed the system, so that there is a main, a theme, and a crash-log now, and these have varying levels of detail, depending on need. If you happen to have a crash or need to debug a theme, or lua mod, this is now much easier to do.

On the log level preference, 0 shows full detail, where 5 will give you a reduced log-file, usually when you have everything set up and working well.

As we no longer follow the SM logging system, we have added a dummy ‘info.txt’ for the Windows launcher of GrooveStats so the launcher for that system still works.

This release also sees some changes to the FFMPEG builds used in OutFox. We had discovered there is a memory leaking bug in upstream which doesn’t really affect many of the video players out there generally, the code we use to acquire and display video data is based on the functions that are bugged in newer versions, so folks using banners or video backgrounds would end up with crashing and freezes due to this.

We have reverted back to a much older ‘bug free’ build of 4.x for the time being until it is fixed by upstream. If you get any quirks or errors on videos, do let us know; we tried a lot of different formats and videos commonly used, but we didn’t cover everything!

This build adds a support option for those folks on some builds which have had evdev issues with the newer kernels (5.1+) making pads not show up.

By default OutFox uses the event system as this is recommended by distros like Ubuntu and Debian but with recent updates these can miss seeing pads and controllers.

The new pref UseLinuxJS (Use Linux JoyStick) sets /js* by default, so folks can access the controllers correctly. If you want the older behaviour, take a moment to set this to 0 in your preference.ini file in the /save folder. We will keep an eye on this for now, and if you get any errors about ‘access denied’ ensure your user is in the ‘input’ group using a terminal and:

where USERNAME is your current user (type whoami) to see what this is in a terminal.

Let us know if you have any issues, and pop into the Discord server if you need any help!

This month we have been working with the players and developers of the Infinitesimal theme for pump with fixing the hold situation in the simulation of this mode. With a lot of revisions and testing, we can happily report that the holds are operating properly now, and we are grateful to those that gave their time helping us perfect it!

This preference was requested by a lot of our streamer players, as they said it can cause issues with the streaming and capture methods they use.

This preference which is simply entitled AlwaysOnTop is set to 0 (false) by default, which is the normal behaviour of the game. To enable it while you stream you can set this to 1 and the game will always be on the top of the screen even if you click off or have a window behind it.

Thanks to Zui and Shrmp0 in the Discord for making the suggestion known to us and for our streamer friends for enjoying the game on different platforms.

This preference was back-ported from Alpha V as some of our users have requested support for rotational options. This pref is off by default, and allows rotation for vertical based screens where the resolution/display is rotated, mainly for vertical options.

For songs which have a multiple chart in the folder, like pump, be-mu, po-mu, kbx via osu etc, there is a slight bug in the way the game sends the ’length’ data to the theme/engine that counts stages at the moment. This is a long upstream bug and we are working on a fix in Alpha V, and will backport it when it is ready.

The issue is, if some charts are different lengths, they will show correctly in screen game-play, but only display the LONGEST length in the music wheel, or ‘ScreenSelectMusic’ as it’s known to themers. Fixing this bug will also benefit other modes so it is something we want to work on.

This release has an updated installer that better reflects the feel of OutFox, and gives us a better platform to use moving forward. We hope you like it!