Want your arrows to dance around to the music (as seen in Pump it Up PRO 2 and the StepMania/ITG Modfile Community)?

Well, if you’re a fan of modifiers and attacks, this guide is for you!

Modifiers (or Mods) apply all kinds of effects to the notes in a song - they can make the notes scroll in different directions, bounce to the beat, and many, many more things!

You can manually turn on modifiers on any song by entering the player options menu (press start twice when you pick a song to play), and choosing Modifiers then Exit at the bottom. Mods in the Acceleration, Effects, Appearance, and Scroll categories work best for attacks - feel free to play around! 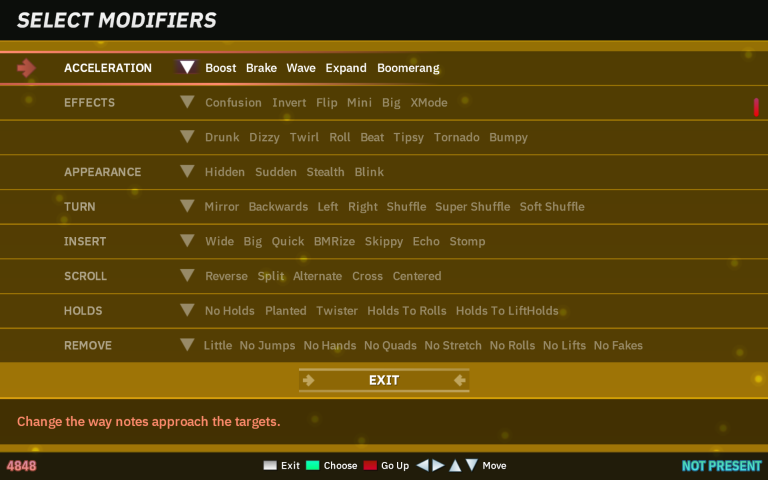 Attacks are one of the easiest ways to add Modifiers to your simfile - Attacks will apply whatever mods you want at specific times you set in the song!

For StepMania 5/Outfox-based arcade cabinets (and SM5-based games like PIU Infinity), Attacks can even be used in USB custom songs and charts (if enabled)!

Adding Attacks to a Simfile

We’ll assume you’ve already created a simfile, and know a bit about how to use the editor here. 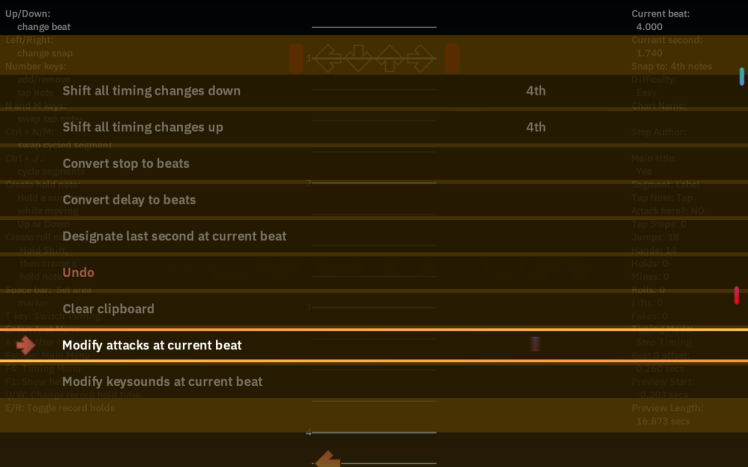 Attacks only last a few seconds by default - to make it last longer you’ll need to edit the attack’s length. 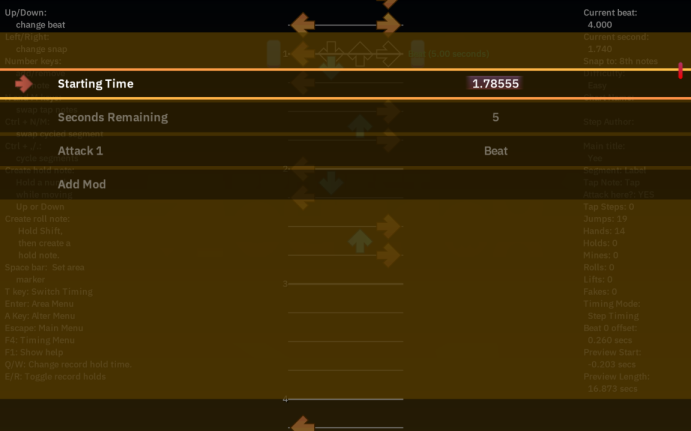 Is Beat too wild? Not wild enough? You can fix that!

To change how strong a mod is, add a percentage before it, like 50% Beat

By default, any mods you add default to 100%. You can dial this down if you don’t want a mod to be as strong.

Percentages above 100% are a-ok if you want really strong mods! Negative percentages like -50% Beat work too if you want to totally invert an effect (it might not be obvious on all mods, but it does work).

Finally: No means the same thing as 0%. Say, if you have a Beat attack earlier in the song, you can turn it off with 0% Beat or No Beat - either works!

Want a mod to slowly fade in over time, or instantly go to max strength? You can change that too!

To change how fast/slow a mod is applied, add a * and a number before the mod, like *2 Beat

Mod approach rate can also combine with any strength, including 0%! If you want to get rid of a mod really fast, you can use an attack like *50 0% Beat.

Next up is to play around with Modifiers! Experiment with what effects you can get, and discover what you do/don’t like!

What Mods Can I Use?

Check out the Guide to Mods in the sidebar for a list of mods you can use!

Some mods you add (like Drunk, Tornado, Boomerang) may change behavior depending on the theme you’re currently using.

In older versions (like Stepmania 5.0/5.1), the theme’s internal resolution (HD vs non-HD themes, specifically SCREEN_HEIGHT) is used in calculations for certain mods. On these versions, these mods will behave differently on themes with different internal resolutions.

In Outfox, these calculations are performed based on a completely separate theme metric instead, ModifierHeight. If the theme changes this value, it will affect those calculations (and therefore mod behaviors, and is noted as doing so).

Plan accordingly if you plan on playing your simfiles/chart edits on different versions/themes!